Bazaar and Festival of the Four Winds

In July 2013, the Guild Wars 2 team released a special, limited time map called the Labrynthine Cliffs in an event known as the Bazaar of the Four Winds. Those who were there for the 2013 event may remember that this is where the Candidate Trials took place; players had the choice of casting a vote for either Ellen Kiel or Evon Gnashblade to be elected as part of the council of Lion's Arch.  The Bazaar also served as a prequel for Living Story Season 2.

In 2014 the map returned to celebrate Guild Wars 2's release in China and was renamed as the Festival of the Four Winds. The Labrynthine Cliffs saw many changes that fell in line with the coming events of Living Story Season 2. As a result, the Zehpyrites' flying ship is no longer present on the map and has instead been replaced with Captain Ellen Kiel's airship, the winner of the Candidate Trials from 2013.  In 2018 the Festival of the Four Winds returned as an annual event.

There has been a lot of changes besides the ship on the map. A lot more buildings have popped up, suggesting that there are many more people now living in the cliffs. Tourists from all across Tyria and Elona have appeared to soak in the sights and add plenty of new conversations to the current map. There are a few missing or added rock structures between the two maps and more decorations have been added since its first release.

Perhaps the only change I don't agree with is that there are no longer cats or kittens on the map...

Posted by Alucardalina Claire on Monday, August 19, 2019 No comments:


We relit Kormir's protections fire inside the Chamber of the Sun - which will protect the inner chamber from Kralkatorrik's attacks - and gave our reclaimed sanctuary a new name: Sun's Refuge. -"My Story"

Small ponds have become fire pits since we left the sanctuary in the first game. The brand has left its mark on the village outside. Even after the wrath of Joko and the destructive forces of Kralkatorrik, the inner sanctum becomes a refuge for the Sunspears again after 250 years.

The Sunspear Sanctuary was a hub of quests and vendors in the beginning of Nightfall. Visiting it several times was inevitable and maybe that's why the reveal of Sun's Refuge appealed to so many players; it was a place that a lot of players of the first game could recognize easily.  In Guild Wars 2 it has become similar to a home instance, where you could build up your surroundings.

I chose to take these pictures before upgrading due to Koss's line about it probably being untouched since he left it. This was probably the best opportunity to see how it has truly aged between both games. If you're looking to take a look between both games, I suggest standing where the Xunlai chest is to get your bearings. The portal next to the chest and the center of the map are points that you'll want to keep in mind as you move around.

"This open-air laboratory, with its multiple solar reflectors and pedestal-mounted astrolabes, is the center of astrological and astronomical study in Elona." - In game description


While the Astralarium began as a small outpost in the first game, it expanded into the tower surrounded by gardens that we see in the second game. Unlike most of the other places we've covered from the Isle of Istan, the Astralarium seems to have become more Vabbian in style. It's amazing how similar the land maps are despite these major changes between the games.

It was difficult to orientate my character for screenshots between the games because there are no real guides on the ground. Instead, I had to look at the shape of the land to get the approximate locations between the screenshots. I highly suggest doing the same if you want to compare them yourself. 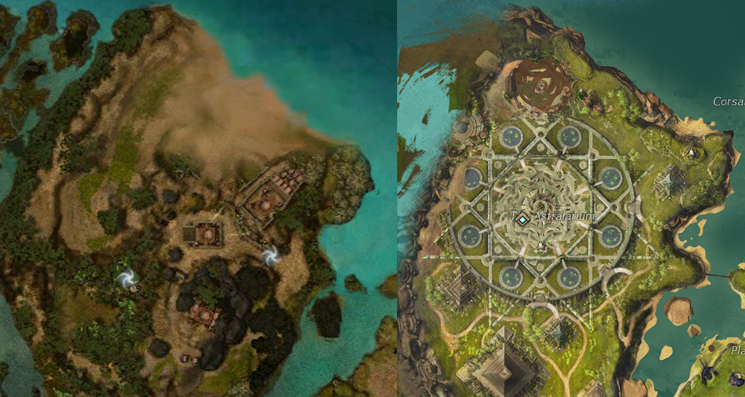 "Change blows like a wind across our land. But our people are like the plants of the plains...we may bend under pressure, but we shall never break." -Sehti

The Sunspear Great Hall is another outpost from the beginning of the Nightfall campaign that has seen a takeover by Palawa Joko in the second game. Similar to Kamadan/Palawadan, the main statue of the outpost has been replaced with one of Palawa Joko instead. Unlike the major city, however, the outpost keeps most of its distinctive layout which makes this an easy place to connect the two games together visually. 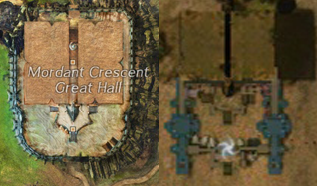 "Built around relics and statues from the days of the Primeval Kings, Kamadan has earned the title, Jewel of Istan." -Outpost description

The Jewel of Istan may have survived more than two centuries between Guild Wars and Guild Wars 2 but not without major changes. While the layout is pretty similar on the map, actually walking between Kamadan and Palawadan shows that a lot has happened since Palawa Joko took reign. The stairs have been inverted in front of the statue and new buildings have sprung up around the merchants area from the first game, for example.

Kamadan is really simple to get to since it's the first major city of Nightfall. Palawadan, however, is filled with enemies; the best time to get a good look at it is after the meta event has been cleared. I recommend starting at the statue in the west and running clockwise to get a feel for the area between the two games.

"From here, one may ascend to the floating Sebelkeh Basilica itself, the most ornate and magical temple in Elona, and the heart of the Lyssan faith." -Outpost description

The Grand Court of Sebelkeh gets its name from the large floating court above the Mirror of Lyss, called the Sebelkeh Basilica. The namesake has been branded in the second game, however.

The Grand Court of Sebelkeh is simple to find on the Domain of Vabbi map in Guild Wars 2; just look for the square north-eastern section of the map. Finding the outpost in the first game is just as easy since it happens to coincide with a primary mission. If you're looking to take pictures, you'll need a skimmer mount in Guild Wars 2 or willing to keep up with the debuff that causes damage over time.


There have been some changes to the site recently. In order to keep the amount of lag on the page lower, most images in posts will now be under a "read more" link.